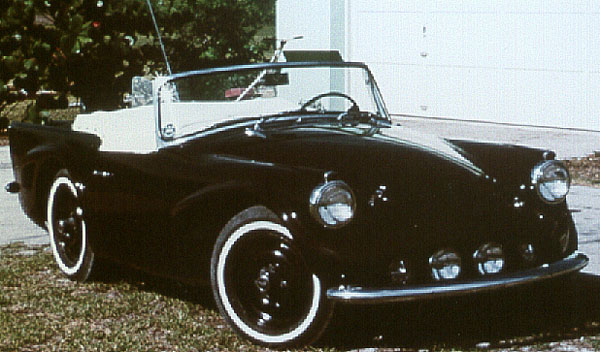 History
The SP250, also called the Dart, was Daimler's answer to all those UK car makers who were selling every sports car they could produce to a hungry US market. With their new chief engineer, who came from Triumph, they designed an all-new (to Daimler) 2.5 litre hemispherical combustion chambered overhead cam V8. It's design was really influenced by an earlier Triumph motorcycle design, and was originally designed to be air cooled! Once the engine was tucked under the bonnet of their prototype, the Daimler engineers realized they had a problem: cooling. To solve the problem, they cast a water jacket around the outside of the engine and ran hoses around from spot to spot to get an even amount of cooling. Unfortunately, they put this design into production and early engines have many rubber hoses. Fortunately, however, the engine is rarely damaged when a hose blows. Before the 25th car was produced, they released a new cooling system that eliminated most of the problematic hoses. Here is a photograph, courtesy of Patrick Tillery of a later engine photographed from the left side of the car. Note the twin SU carbs sitting virtually on top of the engine and the high degree of polishing an SP250 engine requires! This redesigned engine was also installed in a number of Jaguar Mark II chassis and sold as a Daimler Sports Sedan.

Here is a Side view of an SP250 with Patrick Tillery at the wheel in 1963. You may note that there is an aftermarket towing hitch on the rear of the car. Patrick says that he used it to tow a 21 foot deep V hull boat!

The body is fibreglass over a metal frame with a conventional suspension setup. It's quite common to find apparently "unrusted" cars with significant hidden rust in the frame areas, since many sellers don't even realize the car is fibreglass.

The SP250 had a nearly 10 year production length, but only 5 years of import into the USA, it's major market. Production supposedly ceased in 1968, but several later cars are known to exist.

Buying an SP250
Insist on a complete car. While most of the electrical system is genuine Lucas and available readily from Jaguar or Triumph dealers, the rest of the car is full of hard to obtain parts. Prices for SP250's range from $300 parts cars to $25,000 concours examples. Expect to spent at least $6,000 on a good running car "with potential". Don't expect to spend less than twice that to purchase a really nice car that's running well.